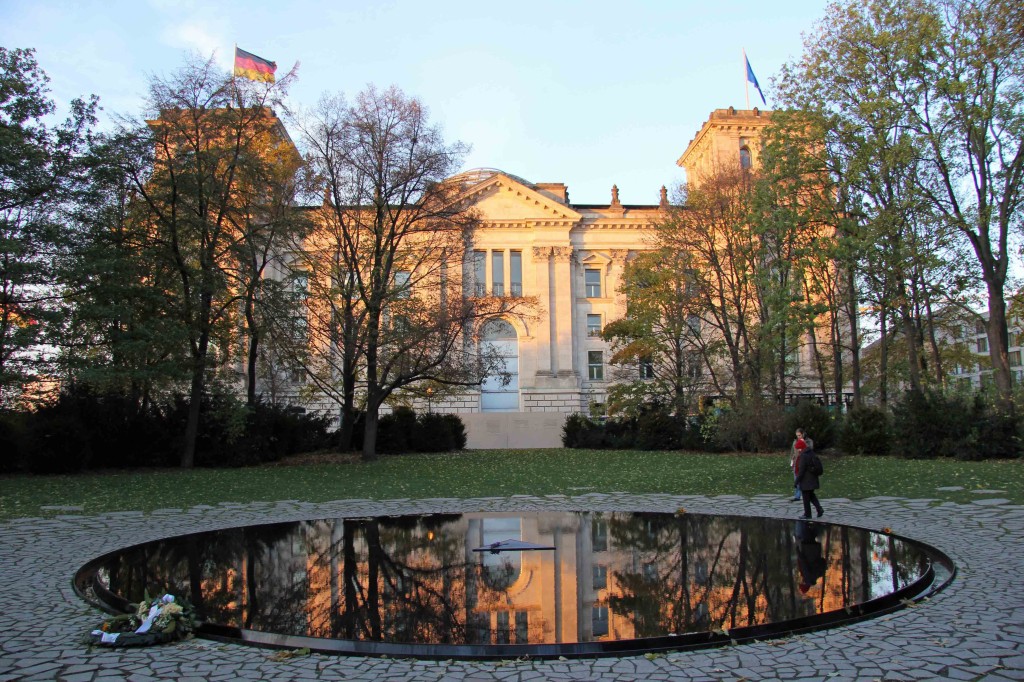 When I heard that a new memorial to the Sinti and Roma victims of National Socialism was being unveiled on 24 October 2012, near the Reichstag in Berlin, I thought it would be good to see the ceremony.

I didn’t realise that it would be an invitation only event with the whole area fenced off, manned by security guards and swarming with police.

After standing around for an hour or so, hoping to spot Angela Merkel, some of the crowd was allowed through.

Now’s my chance I thought.

But no, thwarted again.  People were only allowed to pass through if wearing a blue wristband. The security guards pointed at a counter a few metres away.

And when I got there the last of the bands was handed to the lady in front of me.

I did finally get to see the Denkmal für die im Nationalsozialismus ermordeten Sinti und Roma Europas (Memorial to the Sinti and Roma of Europe Murdered Under National Socialism) on a sunny autumn day a couple of weeks ago though. 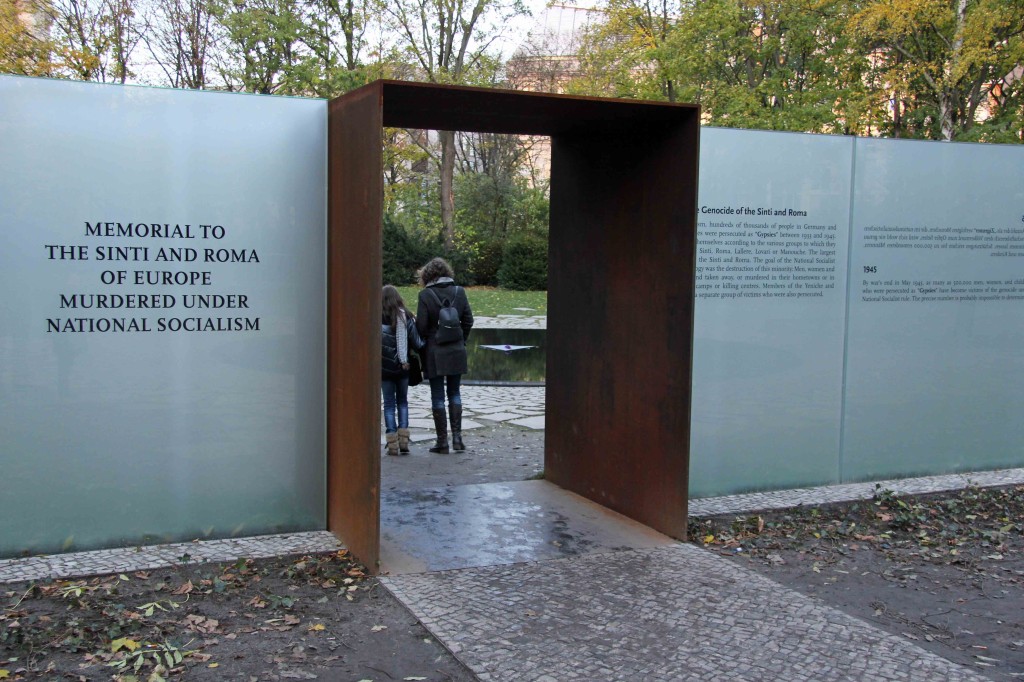 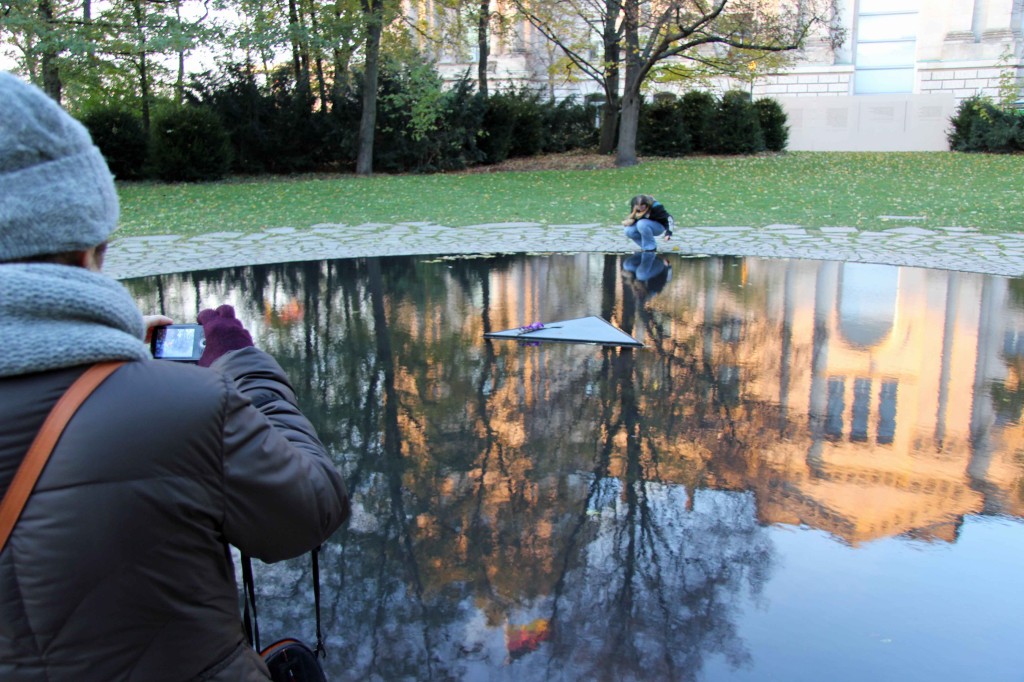 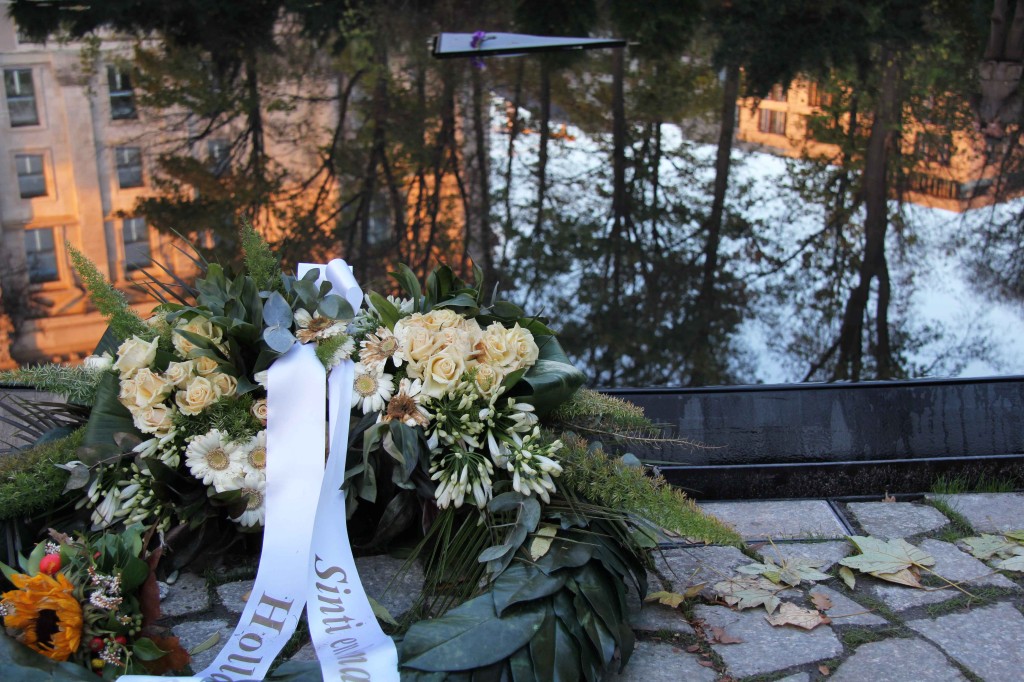 The memorial, designed by the Israeli artist Dani Karavan, is a circular pool of water with a triangular concrete plinth at its centre, on which a fresh flower is to be placed each day. 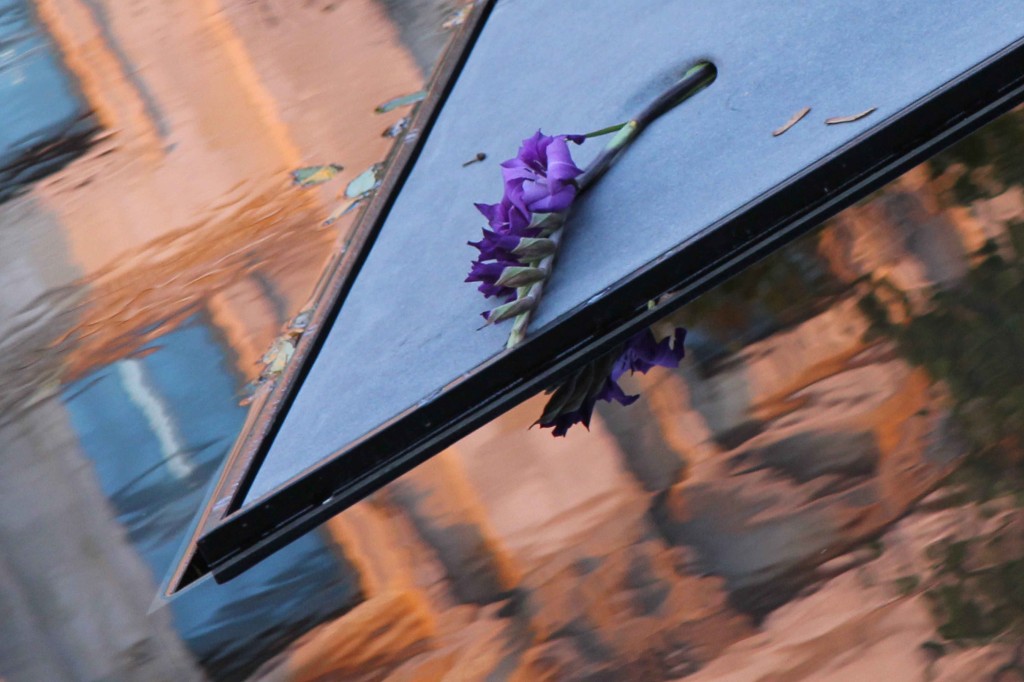 The words of Auschwitz, a poem by Italian Santino Spinelli, are formed in the metal surround of the pool in German: 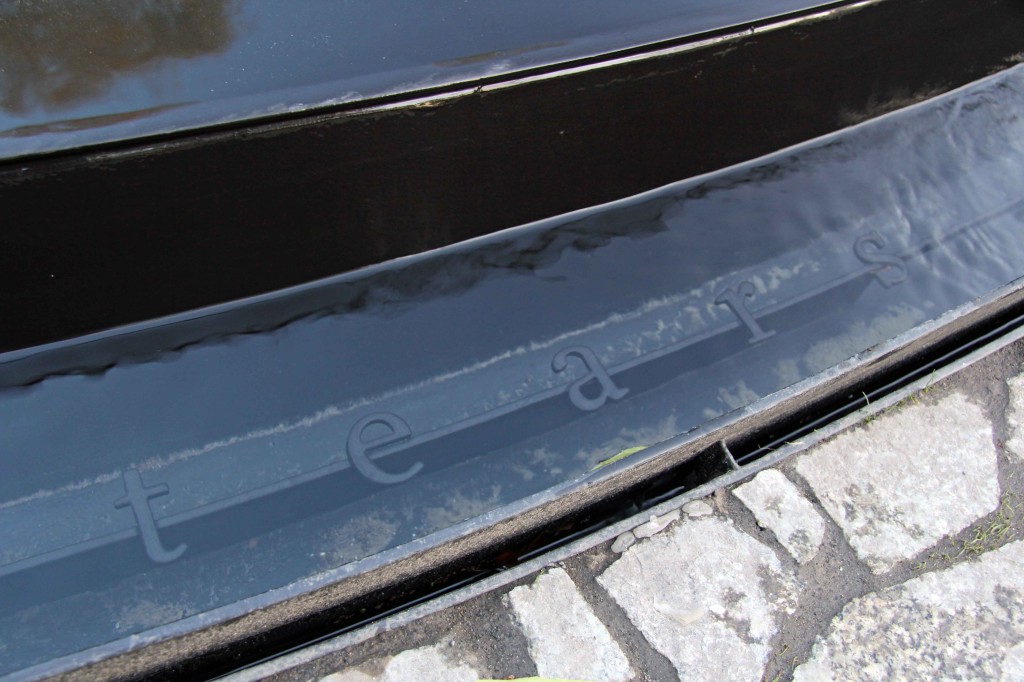 Violin music, at times almost imperceptible, plays in the background and seems to bounce around the clearing in which the memorial is located.

Partly surrounding the site is an opaque glass wall with a timeline tracing the genocide.

The memorial has its own protracted history.  The suffering of the Sinti and Roma people was not officially recognised by the German government until the then Chancellor, Helmut Schmidt, did so in 1982, 37 years after the end of the war.

A further ten years passed before it was agreed in 1992 that a monument should be erected and a decision on its location wasn’t made until 2001. 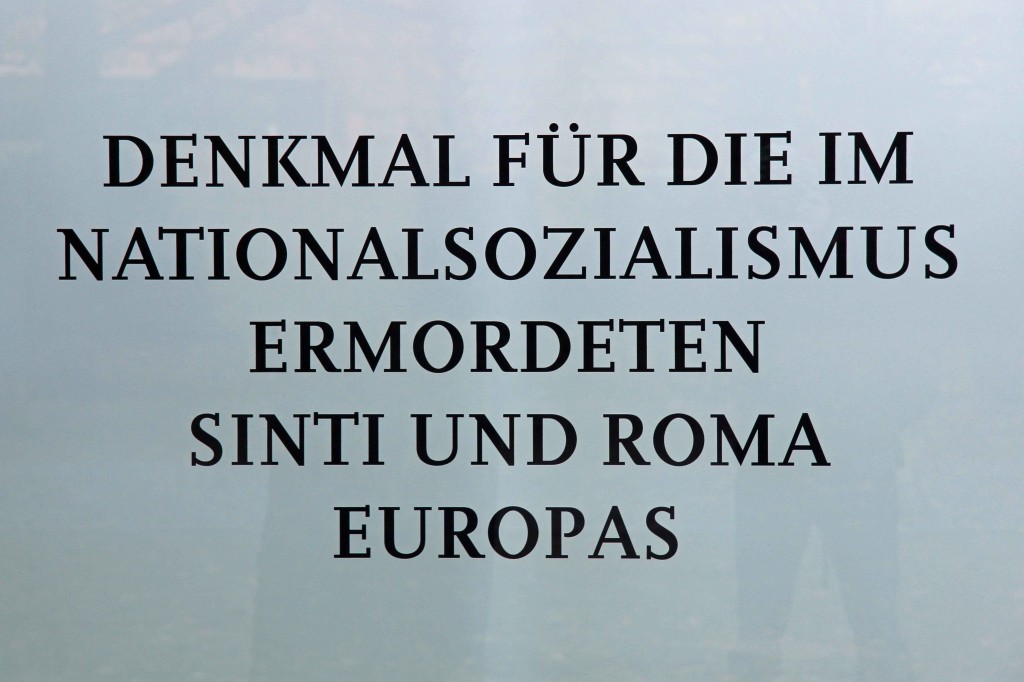 There were then more delays while the Central Council of German Sinti and Roma debated the wording to be associated with the memorial, particularly the possible use of the term ‘gypsy’. 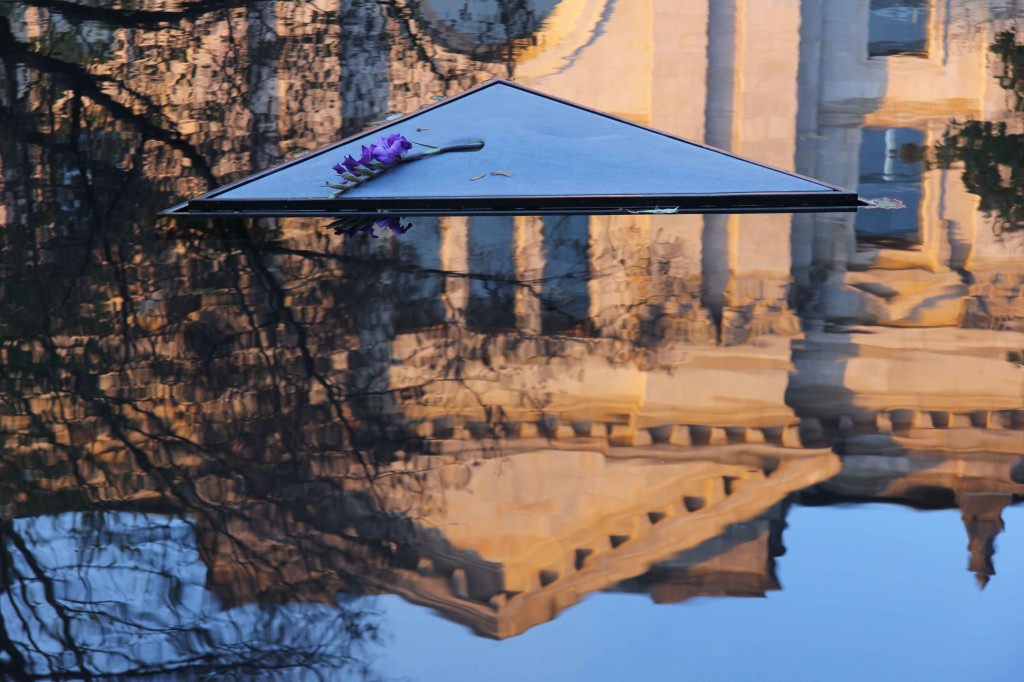 Now that the Memorial to the Sinti and Roma of Europe Murdered Under National Socialism has finally been inaugurated I think that it offers a suitable location for the quiet contemplation of the horrors of the holocaust.

Apocalypse: The Rise of Hitler
A Tribute To Prost